On Earth Day this year, “The March For Science” was a organized as an effort to show support for science. People gathered and walked in cities and towns across America as well as around the world.

Walking alongside thousands of other people in Seattle, I felt almost as though I was part of a meandering river of people flowing through downtown, filling the banks of a two way street. There were children and adults of all ages carrying a diverse array of placards that highlighted the importance of science in our lives. Be it biology, chemistry, ecology, physics, or medicine, science was the unifying theme. I carried two cardboard signs to illustrate gifts of science near and dear to my heart: “Science cures cancer, ” and “Vaccines save lives.” As I walked I reflected on the role science plays in our society, and how it supports each of us everyday, in a multitude of ways. I also reflected upon the support we in return, give to science.

As a physician, nearly everything I do is because of science. Whether it is the stethoscope I use, the medications I prescribe, the diagnostic tests I order, or even how I make medical decisions, it is the result of science. Science encourages a manner of thinking that is invaluable: the scientific process is a method of thinking that utilizes objective evidence, and helps separate the useful from the useless. We live in an era where information is in excess, and the way scientists evaluate information helps illuminate the truth, and provides me with the tools I need to practice medicine. As I walked not far from the Seattle Cancer Care Alliance, through the busy downtown and beneath the Space Needle, I wondered if our relationship with science has become a one way street. In other words, while science supports us every day in most everything we do, do we as a society in return fully support science? I wondered if we take science for granted- if we have begun to pick and choose what to support depending on how it fits into our existing belief systems, or how it aligns with our lifestyle.

The most obvious example that came to mind is “Climate Change.” Scientific research consistently supports the notion that because of fossil fuels – and the subsequent accumulation of greenhouse gases- Earth’s climate is warming. However, these findings have often been met with skepticism, because supporting climate change frequently is at odds with a lifestyle and economy that relies heavily on cars and a society founded upon energy consumption.

Another common scenario – one I encounter every fall- is beliefs regarding the influenza vaccine. It is not uncommon for patients to readily accept every vaccine I offer, except the influenza vaccine. Research has clearly shown that receiving the flu shot significantly reduces the chance of hospitalization or death from influenza. Despite this knowledge, the reasons I hear from patients for not receiving the vaccine are diverse and not based on logic: “I don’t believe in the flu shot,” “I never get the flu shot and never get the flu, so I don’t need it,” or simply, “I don’t do the flu shot”, end of discussion. 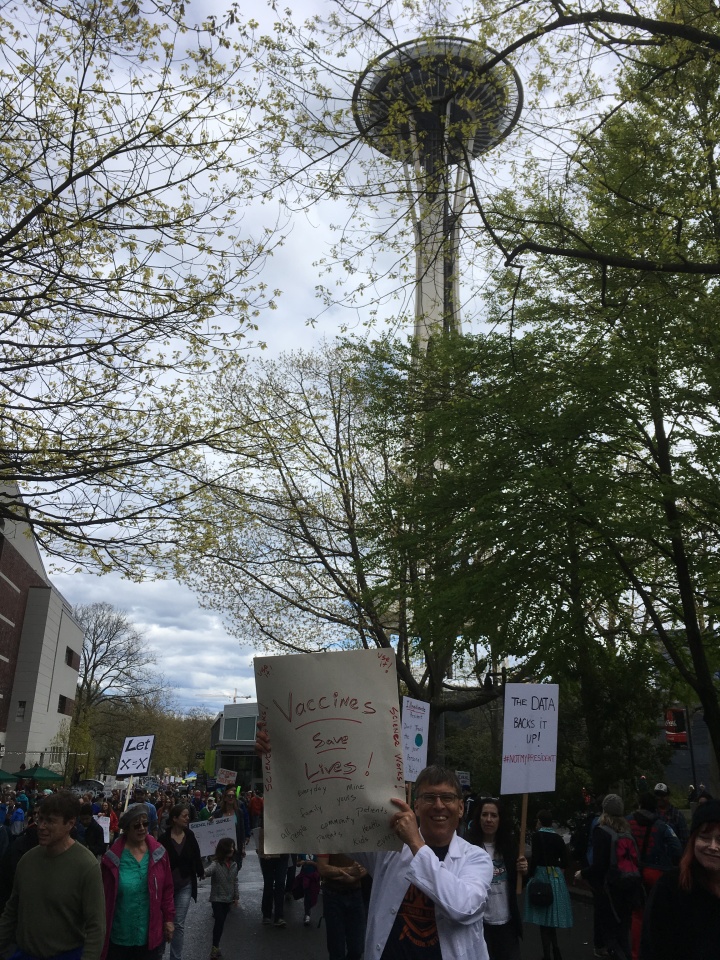 The common theme between these examples is the tendency to selectively choose what scientific data to believe depending on how the information aligns with lifestyle or preexisting beliefs . It is almost as if science has become a buffet, and individuals take the data they want and skip that which is undesirable or inconvenient.

As a society we cannot afford to have a buffet style, inconsistent perspective when it comes to science. Science may reveal concepts that challenge- or be at odds with- existing belief systems, but that’s how science is and always has been. Facts are facts. To pick and choose facts depending on what may be convenient to believe is dangerous. As a cancer survivor, I am alive because of science, and without the benefit of science to aid me in my work as a physician, many more of my patients would experience suffering and premature death.

Science truly supports each and every one of us, every day. The time has come for all of us to acknowledge this truth, and the time has come to consistently support the scientific process and to be open minded to the conclusions it reveals. A supportive relationship should be a two way street.